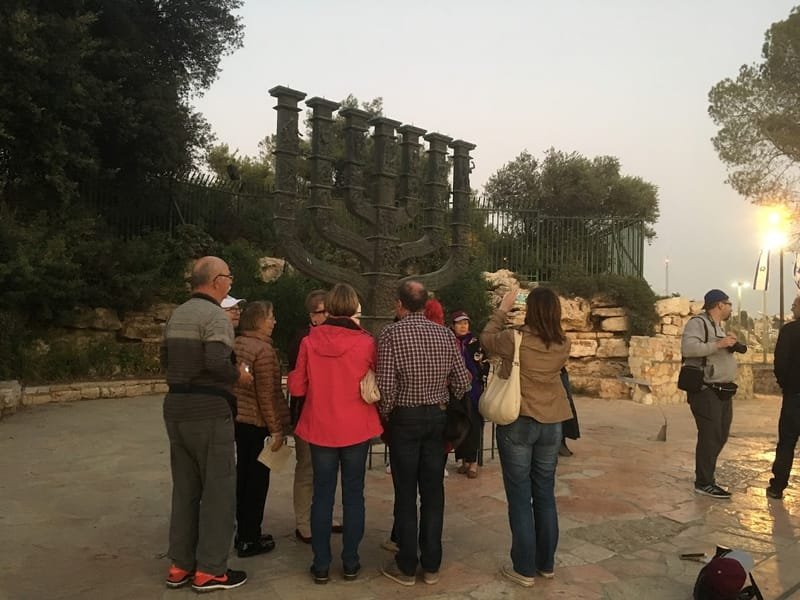 A day in the "City that never sleeps" – Tel Aviv! In Jaffa we will stroll through the small, winding alley-ways, look at some of the local galleries which made Jaffa famous, and hear some of the stories of different people who acted in Jaffa, like Greek Andromeda, King Salomon, St. Peter and Napoleon… Tel Aviv, also known as "The First Hebrew City", is famous, among many other things, for the new life-concept of its founders, who dreamt of the resurrection of the Jewish people as an equal, modern society. This ideal was expressed by the Bauhaus Style, which made Tel Aviv's "White City" a UNESCO World Heritage Site. Here, at the wide Rothschild Boulevard we can also visit the Independence Hall, the place where David Ben Gurion read the Independence Declaration of the State of Israel. We end the day at the Carmel Market, Tel Aviv's Open-Air Market – a kaleidoscope of colors, sounds and smells…             Overnight at  ISROTEL Royal Beach Tel Aviv

After a healthy breakfast, we drive up towards the Holy City of Jerusalem. We start our visit here with a Segway Tour from the Peace Forest and along the Haas Promenade. This enables us to enjoy a panoramic view of the city, but also have some fun! A short drive brings us to the Jaffa Gate, and a few more steps take us up right on the Walls of Jerusalem! We walk on Jerusalem's ramparts from the Jaffa Gate to the Dung Gate, with a unique view over the Armenian Quarter and into the center of the New City of Jerusalem. Stepping down from the Ancient Wall, we head down to the "City of David", to experience the ancient water-system, built partly more than 3000 years ago! Entering Jerusalem's Old City we will not miss, of course, the famous Western (Wailing) Wall, a place of prayer and hope, where, already centuries ago, Jews came to utter their most intimate wishes in front of the Creator of the world. We continue, over the roofs of the Old City, viewing its 4 Quarters from above, and down to the Church of the Holy Sepulcher, Christianity's Holiest site, housing a variety of most holy chapels and sites that attract Christian pilgrims from all over the world. From here we walk back to the Jaffa Port and head back to Tel Aviv. Overnight at ISROTEL Royal Beach Tel Aviv

We leave Tel Aviv and drive to "The Land of 1000 Caves" – Beth Guvrin, where we visit a variety of man-made caves, which made the site a UNESCO World Heritage Site. Now we continue deep into the desert and all the way to Mamshit (Memphis), once a blooming city on the famous "Incense Route", where Caravans of hundreds of Camels, loaded with the best of Arabia's Goods passed on their way to the Port of Gaza. Here we will change our modern car with the back of a camel and ride on ancient paths to the lost Nabathean City, re-discovered in the 20th Century. Now it is time to head down as deep as it can get, in order to uplift our body and soul by the soothing and healing waters of the Dead Sea.   Dinner & Overnight at ISROTEL Dead Sea

A day by the Dead Sea, the deepest place on earth! We drive north to Ein Gedi, an Oasis and Nature Reserve, where 4 springs of fresh water flow through the desert and create a small paradise for animals and plants. We will walk quietly through the reserve to the waterfall, hoping to see a few of the many animals and birds that also enjoy this wonderful natural creation. A 10 minutes drive along the shores of the Dead Sea brings us to Masada, a magnificent fortress, surrounded from all sides by high and steep cliffs, where less than a thousand Jews sought refuge during the 1st rebellion against the Romans, and fought them till Death. Their courageous spirit became a symbol of Jewish bravery for the modern State of Israel and made this site a UNESCO World Heritage Site. In the afternoon we will set out for a Jeep-Tour through the bizarre landscapes of the Sodom Mountain (oh, yeah! THAT Sodom…!!!) before returning to our Isrotel for yet another stay by the soothing and relaxing Dead Sea.  Dinner & overnight at ISROTEL Dead Sea

Continue southwards bound on Route 90, Israel's longest road. After around half an hour's drive, we leave the main road, driving on the "Peace Road" along the Jordanian Border. Here you can see the super-high-tech Israeli Agriculture, full of innovative ideas, that turned the Arava Desert into a blooming paradise from where specialized agricultural products are exported as far as USA and China, but also hear the incredible stories along this border, which was officially a cease-fire line between two countries at war, but actually served as a model for fruitful cooperation and coexistence between Jews and Arabs in the heart of the Middle East! Further on Route 90 we visit the Timna Park, a unique mixture of huge Rock Formations such as "The Mushroom", "Spiral Hill", "The Sphinx" and more with some astonishing findings of the oldest copper-mines in the world, allowing us to crawl through mines made by the Pharaohs and even people from the Chalcolithic Era! Drive to Eilat for Check-in at the ISROTEL Royal Beach, where we will stay for the last two nights.

In the morning we will visit the Eilat Underwater Observatory, where you can observe natural life in the colorful Red Sea Coral Reef and contribute to its preservation without getting wet. In the afternoon you can really get wet and enjoy the variety of Water-Sport Activities Eilat offers, such as Sailing, Scuba-Diving, Snorkeling, Parasailing, Water-skiing and a lot more…

Transfer to the Eilat Airport for your flight back home (either first domestic flight to Tel Aviv or direct flight from Eilat).

Above tour operated as a Private tour, for quotaion and more information please contact us at info@ahalan.co.il or call 1-800-942-8046 (USA & Canada Toll Free)